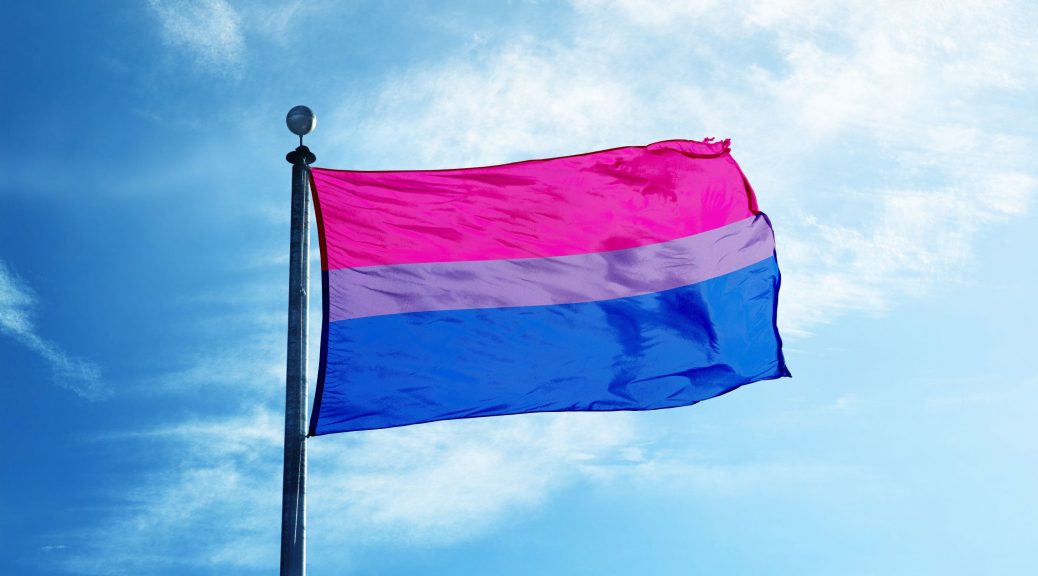 It probably comes as a surprise to most people because I’ve been able to hide safely inside of a (mostly) happy, heterosexual marriage for the past 18 years. That’s the beauty and the frustration of being bisexual: you have the option to ignore the reality of your sexuality but you can also feel invisible – as if no one can know your fullness without intentional effort on your part. And the truth is that I didn’t always know either. I suspect it was in large part due to religious trauma that I dissociated from this part of myself for a long time and stuffed it into a tiny box hidden away. But now I’m weary of feeling invisible. I am tired of pretending to be an ally when really I am fighting for my own humanity.

In 2018, as a part of my work, I arranged for a therapist who specialized in the trauma therapy called Lifespan Integration Therapy to travel to Indonesia and train a group of counselors who work with survivors of trafficking. Part of the training was for the counselors to be clients for a session of the therapy, and though I am not a counselor myself, the training therapist offered to do a session with me as well. In this type of therapy, memory is used as a time marker to help people who have experienced trauma access memories and put them in their proper timeline (thus resolving trauma which is stuck in the present in our brains).

It turns out that my earliest memory (age 5 or 6) was seeing our pastor’s college aged son excommunicated because he was gay. It was the first time I heard the word, and the disgust with which it was said was so impactful that it became embedded far back in my mind. While the memory is still patchy, I remember words about how his father was unfit to be a pastor because he couldn’t “manage his own household,” a terror that became a part of me as a pastor and later missionary’s kid. Maybe that’s why when I saw attractive females, I never labeled it as “attraction.” I just called it “objective truth.” I wasn’t interested in them; I just recognized that they were physically attractive. I thought it was that simple.

As life would have it, I met my husband at age 15, started dating him at 18, having only ever had 1 other boyfriend and a couple of random dates with other guys in college. We married 20 days after my 20th birthday, and for the next 14 years, we existed in the bubble of the same conservative evangelical culture that I was raised in where being gay was a sinful choice like drinking too much or gambling. It was theology that never settled well with me, and as scientific articles began coming out concluding that sexuality is part of our biology rather than a choice, I became politically affirming. However, I believed that gay Christians were called to a “higher standard” of celibacy.

I had been in vocational ministry as a missionary for my entire adult life, and the political affirmation of gay rights was already a divisive issue for many people. I had to be careful because if my support for gay rights became known to donors, they would pull their funding for our ministry and we would lose our jobs. Fortunately, being overseas made it easy to hide. But the reinforcement that supporting the LGBT community would cost me and my family our life and livelihood was real. In 2018, we left vocational ministry, and there was finally space to ask the deeper questions that I knew very well could lead me to conclusions that would have gotten me in trouble in our previous life overseas. I started reading affirming theological positions and listening to stories from gay and lesbian Christians themselves.

In 2019, I listened to a podcast called Blue Babies Pink which was written by the gay son of a Baptist pastor who had been celibate until, over a long period of time, he became fully affirming. He spoke about families and how within Scripture, family and the creation of a family is seen from cover to cover and is posited as one of God’s greatest gifts. The church tells gay Christians that the church is their family, but as a mother and wife, I knew that was a ridiculous comparison. You can have deep roots in a church community, but they are not people that you hold hands with in the dark, give your power of attorney, or pass your name on to. In conservative theologies, gay people are the only group of humans who aren’t allowed to create a family. But if sexuality was how God made us, and God’s best gift is to be in a family, it made no sense to me that God would withhold that gift to a group of people he made exactly as they are. I became affirming.

Even still, I did not realize that this shift was another crack in the box I had been stuffed in. Looking back, I can see that being “right with God” was so important to me that until I could understand and believe an affirming theology, I would never have been able to see that it applied to me too.

As I landed on an affirming theology, I started to pull apart the religion I was raised with in general. I looked very hard at the purity culture that puts the responsibility for sexual sin squarely on my shoulders as a woman. To even look at a man not my husband was lust and just as evil as an illicit affair. I was told that to have emotional intimacy with any aside from my husband was a betrayal. If you know me, you know that I am very, very good at self-control and achieving my goals. My goal was to be good, honorable, and virtuous. I was so good, honorable, and virtuous that I turned off my own ability to experience normal feelings of attraction at all outside of my marriage, and even those sexual feelings I had to fight for. I don’t think it’s possible to repress your normal sexual feelings and reactions in every relationship but one. It’s an all-or-nothing repression. So I struggled to connect my brain and body even in my relationship with my husband. “Attraction” was something I was so conditioned to shut down that I would find myself doing the same even with Dan. It was like my body would respond and my brain would dump a bucket of cold water on it. I’d go hot and then immediately cold for no reason that I could figure out. I just thought I was broken, and I guess I kind of was.

While I did and still do love Jesus and follow his teachings, I left the church and began recovering from religious and spiritual abuse. Within therapy and some close, supportive relationships, I got honest about my own feelings and experiences. There was a lot of rage and a lot of grief, but as I learned to be honest about my feelings and beliefs, I was able to experience them too. The bucket-of-cold-water experience became more rare in my marriage, and at times my body reacted to other people with normal sexual feelings that I had essentially disassociated from for most of my life. And then it happened with women too.

It feels anti-climatic to leave it there, but that’s honestly the whole of the story. Dan was a part of this journey for the whole way, and I give him major credit for not being threatened much at all at the idea that I could be attracted to women as well. Our relationship has deepened and our intimate life got a whole lot more fun when I was honest with him, honest with myself, and was no longer scared I was angering God by being who I am.

It’s been three years now, and I’ve only told my closest friends and sisters and a handful of (mostly LGBT+) friends that I know are safe. Partly because I don’t think the truth of it radically changes anything in my life, other than that I am pretty sure if Dan dies first, I’d be dating a woman next. So why “come out” now?

Since returning to the USA, I have been more and more involved in supporting the LGBT+ community. After moving to Florida last summer, it’s become personal beyond my own experience. We put a pride flag outside of our home in large part to signal to our kids’ friends that we are a safe place for them to be who they are if they identify as LGBT+. And apparently it worked. I joke that we have every gay and transgender kid in the district hangs out at our house. There are kids who are out to Dan and me, but not their own parents because they fear for their safety. We’ve been asked by high schoolers if they can live with us if they come out when they turn 18 and get thrown out of their homes. I show up to protests in my “Free Mom Hugs” pride shirt, and I am loud about my protest of the draconian anti-LGBT+ legislation coming through our state government because I love these kids and I don’t want them to hide like I have.

But it feels less and less authentic to present myself as an ally rather than as a member of the LGBT+ community who has been directly impacted by anti-affirming theology, social exclusion, and laws that force us into hiding.

I tell people all the time that kids WANT to tell their parents when they are queer. They want to be loved and affirmed for who they are. They want to be celebrated and adored exactly as they are without any caveats. The same is true for me.

I do fear judgement, disappointment, and unwarranted fear for my soul. I fear losing credibility and my voice. I fear getting slammed with “love the sinner and hate the sin,” and being told that the only reason that I am still okay is because I am in a monogamous, heterosexual marriage. The truth is that people who have a problem with the hypothetical idea of me being in a relationship with a woman have a problem with who I am because it could have gone the other way with a few simple different circumstances. I’ve had the capacity to romantically love a woman since I had the capacity to romantically love. My brain just knew how dangerous that part of me would be to my wellbeing and tucked it away to keep me safe. I could easily hide it if I chose to just like so many bisexual people in heterosexual relationships (we are many!). But I don’t want to anymore.

13 thoughts on “I am Bisexual”