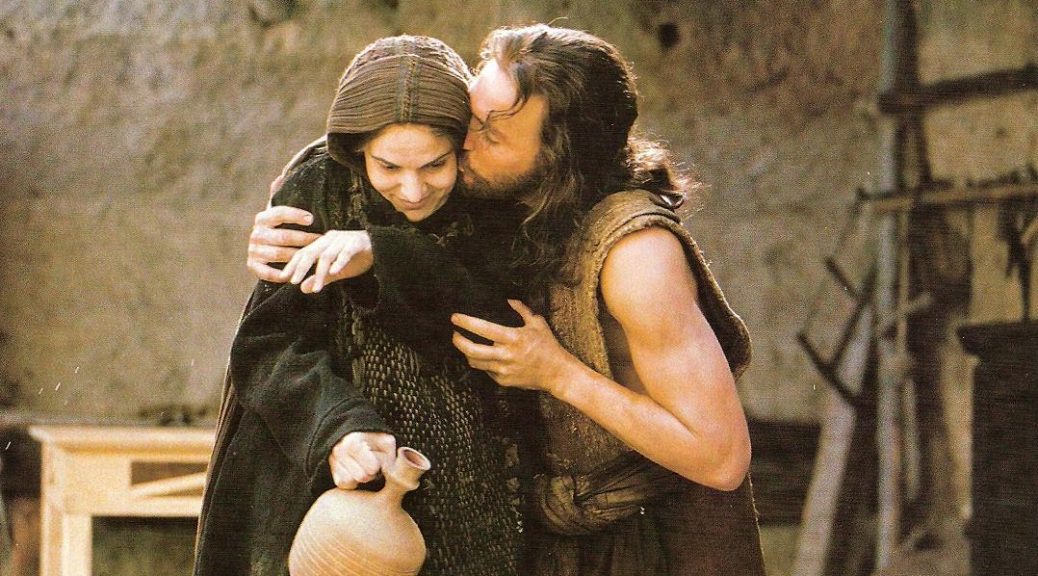 I have four sons, with the oldest on the brink of adolescence. With hilarious regularity one of my kids will ask me how I knew exactly what he was going to do or say or what he was thinking. “Because I am your mother. I’ve known you every day of your entire life.”

Before Jesus opened his eyes as a human child, Mary knew him. She felt his kicks and hiccups. She was the one who answered his baby cries of hunger, kissed his scraped knees, and smiled (or cried) as she saw manhood erase the softness of his childish cheeks. Yet her experience as a mom was completely unique because of the miracle of his conception. When she watched him learn to walk, Mary knew she was watching the Messiah take his first steps toward his mission as rescuer of his people. Everything that Jesus did and said was filtered through the knowledge of who he really was as evidenced by how he came to be. What it must have been like to raise God, to lead God, to care for God, to comfort God. What it must have been like to watch him grow from a babbling baby to the powerful, miracle working Savior.

This year, I’ve spent a lot of time pondering what it means that Jesus was truly human. If Jesus was a truly human child, I believe that he must have developed in the same way as the rest of humanity. While there is no way to know how aware Jesus was of his own divinity and identity as the Messiah at any given point in his life, we know that he “grew in wisdom and stature” (Luke 2). I personally believe that the true humanity of Christ demands that he also grew cognitively, so he must have come into awareness of his identity just like the rest of us do. Mary, however, did not need to learn who he was. She knew exactly what his identity was from his first breath even if she had no idea how this God-child of hers would accomplish his mission.

Thinking of Mary and her relationship with Jesus through this lens of a devoted mother who had experienced her own radical encounter with God regarding her son’s identity makes the snapshots of her relationship with him in the Gospels both delightful and deeply meaningful. It also makes sense of seemingly incongruent stories.

For example, I’ve always wondered about the wedding in Cana (John 2). At that point, Jesus’ ministry had not yet been very public. As the story goes, Mary mentions the embarrassing problem that their host had run out of wine for the guests. Jesus, apparently very in tune with the subtleties of passive aggressive “mom language” knew exactly what she wanted him to do. He said, “Dear woman (a term of endearment), why do you involve me? My time has not yet come.” And then he turned around and rectifies the situation just as his mom had (un)asked. How strange the difference between Jesus’ actions and words in Cana because this actually was the inaugural event of his ministry. Jesus’ time had come.

Once I inserted the relationship between mother and son into that scene, it made perfect sense to me. Perhaps all we are seeing is that Mary knew that it really was time for Jesus to move into his ministry. After all, she had been leading Jesus from the time he was born, teaching him, encouraging him, believing in him as he grew in wisdom and in stature and, I believe, in the knowledge of who he was and what his purpose was. Perhaps this was simply Jesus being pushed out of the proverbial nest by a mom who knew that it was time, that he was ready.

The second story of Mary that seems much more easily understood in the context of a mother-son relationship is tucked away in Mark 3:20-34. It is the one most confusing of all of them and seems to clash with the way Mary’s faith and devotion are portrayed in every other mention of her in Scripture. This story is set in the very early days of Jesus’ ministry when he spoke to large crowds, healing them but also telling them to not tell others that he was the Son of God. In this context, Mary and her family show up to bring Jesus home. On the surface, it seems like they have shown up because they thought Jesus was insane and they wanted to silence him. But how does that make sense given every single other story we have about Mary and her faith in her son?

This story has been a big question mark in my head for years because of how strangely inconsistent it seemed with Mary’s beliefs and interactions with her son elsewhere, and I was delighted to encounter an explanation for it in a recently published book Vindicating the Vixens. One excerpt (pg. 112 – 113) reads:

The word we translate as the phrase “beside himself” describes someone who is confused or has lost something, including one’s spiritual and/or mental balance, or something else. This “loss of way” can be described as “becoming distracted or diverted” or even being “transformed,” an example of use being wine that has “lost its way” to “become soured” (i.e. vinegar). In this broader understanding go their assessment, Mary’s concern is that the excessive demands of the crowd have distracted and diverted Jesus from his larger messianic responsibilities. Her son, she believes, is in danger of losing his way.

Mary’s intervention reflects Mark’s broader theme of messianic misunderstanding and the messianic secret. Since populist messianic ideas threatened to eclipse the true nature of Jesus ministry, the Lord urges his followers not to identify him as the Messiah. Apparently at this point, Mary also struggles with misunderstanding how Jesus is to conduct his ministry and fulfill his messianic destiny. Her misunderstanding would have the same consequence for Jesus’s true ministry as the unbelief of his enemies, and Mark juxtaposes it against their unbelief.

Once admonished by Jesus, Mary and the family disappear from the narrative, along with these concerns.  Therefore, Mary should be commended for taking action that shows the depth of her concern for her son’s welfare…

This clarification of Mary’s possible motivations is far more consistent with everything else that we read about her in the Gospels. And it is also an understandable reaction for a loving mother who sees her kid going off the rails. Mary knew that Jesus was the Messiah. She was clear on that from his conception. Perhaps she was worried that he had forgotten it himself in all the crowds and newness of his early ministry. After all, the contemporary perception was that the Messiah would arrive with armies and flags overthrowing the government and bringing Israel back to power. When she saw her son telling people not to even talk about his identity, she must have been confused. When she saw him focusing on the needs of individuals rather than challenging political power, it could have seemed like he had forgotten why he was there. This might have been no more than a misplaced motherly correction based on a broken understanding of what exactly Messiah meant. Somewhere along the way, Jesus passed Mary’s own understanding of his identity. What she knew when she held her infant son was eclipsed by the God-man who grew in wisdom and stature and in confidence that saving the world he lovingly made would not come with banners and horns, but with sacrifice and healing in the same kind of humility that surrounded his birth. Maybe the memory of that night in Bethlehem was what helped Mary understand and step back to follow rather than to lead in that moment.

Whatever the reality behind that interaction between Mary and Jesus, I love observing the realness and love in their relationship from the moment Mary cried an enthusiastic “yes!” to God’s plans for her life all the way to Jesus’ concern for her future as she watched him dying. Mary, the first human to know that God had finally come, led Jesus through her maternal care as he grew in wisdom and in stature. She encouraged him in his path, perhaps even giving him the push he needed to step into what he had come to do. And when it was clear that he had grown into the fullness of who he was, she immediately and faithfully submitted to him as her Lord.

2 thoughts on “Mary, The Woman Who Led God”