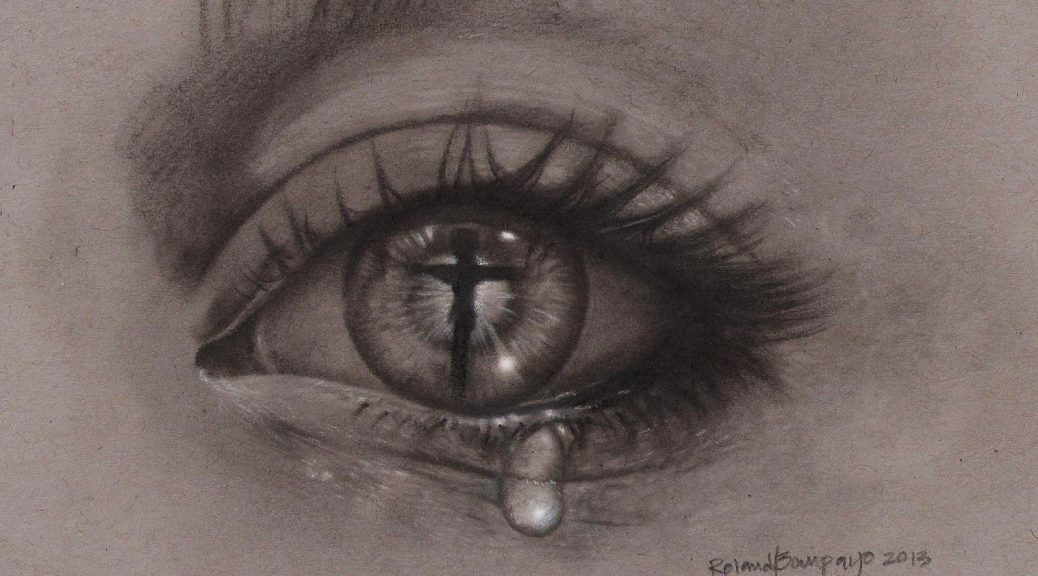 Most people know the story of Jesus’ prayers in the garden at Gethsemane before he was arrested. As Jesus was overwhelmed with sadness and anxiety, begging God to change the circumstances, his closest friends were not there for him (Matthew 26:37-39). Not once but twice, Jesus came to his sleeping friends asking them to wake up and be with him as he poured out his heart to God and waited for what he knew must come next. “You couldn’t even keep watch with me for one hour?” Jesus asks Peter specifically (vs. 40*). Peter, who had sworn just a few hours before that he wouldn’t leave Christ’s side no matter the cost.

This part of the crucifixion story always makes me the saddest. It’s even more painful than the physical torture that Jesus endured. This was the moment that he was truly alone anticipating his coming suffering and still wondering if perhaps there was another way. Jesus’ attitude makes an immediate shift as soon as the crowd arrives to arrest him (vs. 47). He goes from anxiety and uncertainty to resolution and courage all the way to the grave.

I wonder if that had something to do with his friend Mary Magdalene.

Many blend the different Marys in Scripture, not giving them the right to their own stories.  In Mary Magdalene’s case, all Scripture tells us about her past is that at one point she had been delivered from seven demons by Jesus and became his disciple, following him from place to place along with the twelve male disciples and many women (Luke 8:2). Mary Magdalene’s name appears more often than any other disciple’s in the chapters recounting Jesus’ death and resurrection. She remained with him during his death “near the cross” along with (at least) Jesus’ mother, aunt, and John. They were close enough for Jesus to speak to (John 19:25-27). I wonder what kind of comfort it was for Jesus to look down and see that he had friends who did not leave him. They watched for the hours it took for him to die.

Mary also participated in Christ’s burial, seeing where he was placed in Joseph’s tomb (Mark 15:47). But even then she did not leave. Along with another Mary, Mary Magdalene stayed there, “sitting at the front of the tomb” of Jesus (Matthew 27:61). This is a particularly touching scene to me as I remember how Peter, James, and John could not remain with Jesus in his life. Mary Magdalene stayed with him even in his death. While others packed up and retreated in their grief (or fear of being associated with someone recently executed), Mary defiantly stayed and watched for the hours between Christ’s death and resurrection, perhaps even staring at the guards placed there to make sure no one messed with his body. I wonder if she knew what was coming? The tomb had been sealed with an enormous stone, and guards were standing there to keep any of Jesus’ friends from touching the stone… why did Mary leave and return with spices for a body that she had no reason to believe that she would be able to access? I wonder if she knew that this story was not over, even if she did not know how it was going to unfold.

I’ve often thought how beautiful and significant that God chose to reveal the resurrection to women. Those whose testimonies counted for nothing in a court were to testify of Jesus’ victory. For a moment in history, the entire future of the church lay in the hands of a couple of women and rested on their courage to obey Jesus and preach his message. There is so much power in that, but there may be a much more intimate and personal aspect to Jesus’ choice of the women. Put simply, they were still watching so who better to trust with his message? They had not lost hope. They were his faithful friends, and he wanted to talk to them.

The watch between death and resurrection is the loneliest of all. It’s the place where the true crisis of faith is born, and it’s an experience that many followers of Jesus continue to have. As we grow in our faith, our image of who Jesus is gets crucified only to be raised into a more true understanding of him and a more authentic relationship with the God who actually is rather than the idol we were worshiping in our minds. The liminal space in between this death and resurrection, however, is the most disorienting and distressing moments in a believer’s life. Will Jesus stay dead? Is he gone forever? Even if I didn’t really understand all that he was, is he who he said he is? Will he never leave me or forsake me and will I actually find him in my seeking? If so, why does he still seem so… dead.

This has been my own journey in the last couple of years. In seeking to truly know Jesus, who I thought him to be was crucified. Not modified. Crucified. Violently murdered. The ripping of that Jesus out of my mind and heart was… Agony.

But I can’t seem to leave. I am still watching at the tomb. I am staring at that damn stone reciting all the promises of resurrection. Waiting. At some point, somehow, I expect Jesus to whisper my name behind me, and you can bet I’ll fall on my face bawling with all the tears I can’t cry right now. Tears not so much from surprise that he is there, but from relief that the waiting is over.

In the meantime, Jesus, while you stay in that tomb for awhile, I’ll keep watching.

*All quotes from The Source New Testament translation.

One thought on “While Jesus is Dead”