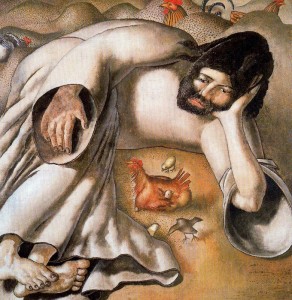 One thing that I am more and more convinced of is the anemic quality of our theological discourse. The anemia exists because doing theology has been a heavily male dominated activity in the centuries since the establishment of the Church. Many of the earliest Christians were women who served as deacons, apostles, prophets, evangelists,  teachers, and house church leaders. After this first generation of women, the dominant patriarchal culture began to and continues to marginalize the voices of half the church. However, if male AND female bear the image of God, it takes both men AND women to best understand the nature and wonder of God. How much of God’s nature have we yet to really understand (or how much we have misunderstood) simply because we do not have the feminine perspective in this conversation? So in the spirit of offering my own feminine voice to the theological conversation, I’d like to propose that the sacrifice of Jesus may have been primarily viewed in masculine constructs and that these constructs may not be the only or best ones to use in our quest to understand the nature of the cross.

My own ideas about Christ’s sacrifice were shaken a bit when I was introduced to dense book called Understanding Religious Sacrifice. It explores the concept of sacrifice from multiple perspectives. My undergrad degree is in Intercultural Studies (similar to anthropology), so I found a particular chapter by Rene Girard fascinating as he looked at the development of sacrifice systems from a historical anthropological lens. He wrote about how anthropological sacrifice is the same across time and cultures, and basically necessitates  the death of an innocent person in order to break the cycle of violence between two opposing groups. His theories are far more complex, but without going more deeply into them, it immediately made me wonder how much of our interpretation of Christ’s death on the cross is based on our existing conceptions of reality. For example, the penal substitutionary atonement theory (that Christ died on the cross to satisfy the wrath of God against sinful humans) is not actually the one believed by the early church, though it is by far the most common view in modern Western Christianity (there is growing push-back against it). Perhaps this interpretation of the event of the cross has less to do with how Scripture presents Christ’s sacrifice and more do with the cultural baggage of the word “sacrifice.”

I will not debate the validity of the penal substitutionary atonement interpretation here, because that is not the point. Rather, what interested me came from a later chapter which highlighted an fascinating contrast to Girard’s anthropological perspective.  I’ve been studying patriarchy and gender justice issues for several years, so it was particularly interesting to me to read Beers’ psychoanalytical chapter asserting that sacrificial systems were created by males in patriarchal societies in order to pursue power and prestige. Beers explains that the notion of sacrifice (the violent death of the innocent to make peace between warring groups) is a patriarchal concept, which fits well with the anthropological perspective of Girard since nearly all historical societies are heavily patriarchal and the sacrifice systems that have been observed in different societies are nearly always enacted by males.

What was most interesting is that Beers contrasts these male-conceived violent sacrifice systems with the life-giving, blood-letting sacrifice of child-bearing and mothering. I don’t know if Beers is correct about the motivations for the early violent sacrificial systems being a male attempt to mimic female life-giving, but I was immediately intrigued by the idea that childbearing might be an equal and opposite type of sacrifice.

Speaking as mother, I can think of no better word for pregnancy and childbirth than “sacrifice.” Pregnancy does nothing good for our bodies. Most of us bear permanent scars from the stretching and shifting that must happen for life to emerge, and our bodies are literally altered in many ways as nerves die and tissues tear and attempt to repair (ask a mom what happens when they sneeze unexpectedly). We are even altered biologically as cells holding the DNA of every child conceived makes their way into our brains. Looking at it objectively, babies are literal parasites of blood, nutrition, body, and mental energy of their mothers. And this is just the pregnancy part of childbearing. The birth process is excruciatingly painful and requires an incredible amount of focus, resolve, and hard work. Childbearing and sacrifice are synonymous, but childbearing is radically different from the sacrifice system requiring the blood of the innocent in order to prevent ongoing violence between enemies. Instead, childbearing is the is the spilled blood of the willing in order to bring new life.

I wonder why we aren’t using concepts like childbirth to understand the sacrifice of Christ and salvation. Christ himself calls our entrance into the kingdom our “second birth” in his conversation with Nicodemus in John 3. Elsewhere the Bible affirms that we have been “born again” because of Christ’s death on the cross (1 Peter 1:3,23). Doesn’t that demand looking at the cross through the lens of childbearing? From Scripture, Christ’s sacrifice seems described far more like the birthing of life through the sacrificial use of his body than the anthropological concept of sacrifice where the death of the innocent calms the violent rage of two opposing parties (because, seriously, what does this notion say about God the Father?).

If we are born-again, Christ is doing the birthing. It makes perfect sense to think of his sacrifice in terms of motherhood sacrifice. His road to Calvary was his labor, and his death was the sacrifice that allowed us to be spiritually born. His blood was the spilled to generate new life, and I struggle to believe it is less than that. The murder of the innocent to satisfy the offended seems like just a cheap patriarchal -based imitation. To me, the image of God as pregnant and giving birth to us through the suffering of Christ in his life and death is so much more of an image of sacrifice than an innocent Christ being murdered by his angry Father who has to take his rage out on someone. Childbearing may be a much better construct through which to view the sacrifice of Christ. Perhaps the reason this perspective is given so little space is that it is a uniquely feminine offering, but we owe it to the Church and to future generations of believers to consider if this is one of those feminine aspects of God’s nature that has been ignored for far too long.

2 thoughts on “The Motherhood Sacrifice of Jesus”