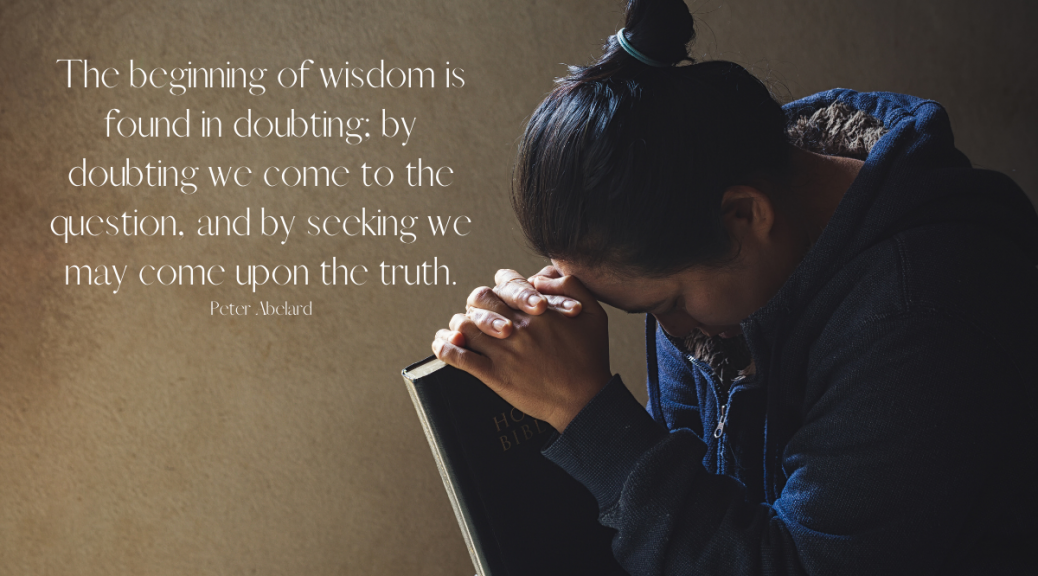 “Keep this in mind: Eve’s sin was a sin of intelligence. She examined what God said and decided it didn’t make sense. She was convinced otherwise, and it led to her downfall. Be very careful not to prize your own ability over the truth of God’s Word.”

The comment stopped me dead in my tracks. It was written by a woman in leadership at a well-known Christian organization as a response to another woman asking about managing faith doubts and deconstruction. I felt the familiar knot of dread in my stomach, the one that I have come to associate with spiritual abuse and the tactics used to keep people too afraid of the consequences to ask their legitimate questions.

Any advice that tells you to stop asking spiritual questions, even if it is wrapped in the package of concern is religious manipulation. Any “truth” that is an absolute determined by a single group or person that cannot withstand rigorous scrutiny is no truth at all. Attempts to shame, cajole, or threaten people to keep them from coming to new theological perspectives is spiritually abusive. We have got to start taking note of what this looks like and call it out publicly when we see it.

We must recognize that whether one goes in with a more literal reading of Scripture or a progressive one, we are all filtering things through our tradition, experiences, and culture. There is no such thing as “the Bible plainly says” as evidenced by the massive amounts of disagreements among followers of Jesus from the very beginning. We are all trying to understand and follow faithfully.

What happens when people begin to have faith doubts or questions about the beliefs of their community is often spiritually abusive. When those entrenched in a community are confronted with inconsistencies in their worldview that they are not ready to deal with, they push them away by first creating a narrative for why the questions can’t be asked. Shaming, undermining a person’s right and ability to think for themselves, and threatening expulsion from the community become the tools used to keep conformity in the group and protect the values and beliefs it has built itself around.

Despite the aggressive efforts to stop the doubts and questions, we have to remember that it is GOOD and WISE to be able to acknowledge when we find that our belief system is logically and internally incoherent. It takes enormous amounts of courage to be willing to examine the systems we have been in and acknowledge where they don’t make sense and where we need to readjust our perspective – even sometimes at great personal cost. Faith in God does not require that we set our brains aside or worry about falling into the “sin of intelligence.” God is not threatened by our questions even if some of the people in our community are. It is okay if we are eventually led away from the belief systems we started with when they become so filled with cognitive dissonance that they are no longer able to hold our faiths.

Deconstruction can be triggered by spiritual abuse, and if it isn’t, it is not uncommon for spiritual abuse to become a part of the experience. This is incredibly painful and disorienting, and often it starts with comments like the one above. For those who are deconstructing, learn to recognize shaming, manipulation, efforts to control, and fear tactics. When you hear them, reject them, and keep asking your questions. For those who have gone through deconstruction, we have an ethical obligation to create paths out of harm for those still in the middle of it. We must be brave enough to say something when we see it happen no matter how pious and concerned the words may seem. For those who feel a deep certainty about their view of the world, you do not have the right to do emotional and psychological harm to anyone to keep them aligned with your beliefs and in your group. Love dictates that we allow others to make their own choices, so you must let go of your fear and sense of betrayal to allow others to make their journeys with honesty and integrity without trying to terrify or manipulate them into compliance. This is how you will want to be treated someday if ever your faith begins to shift too.