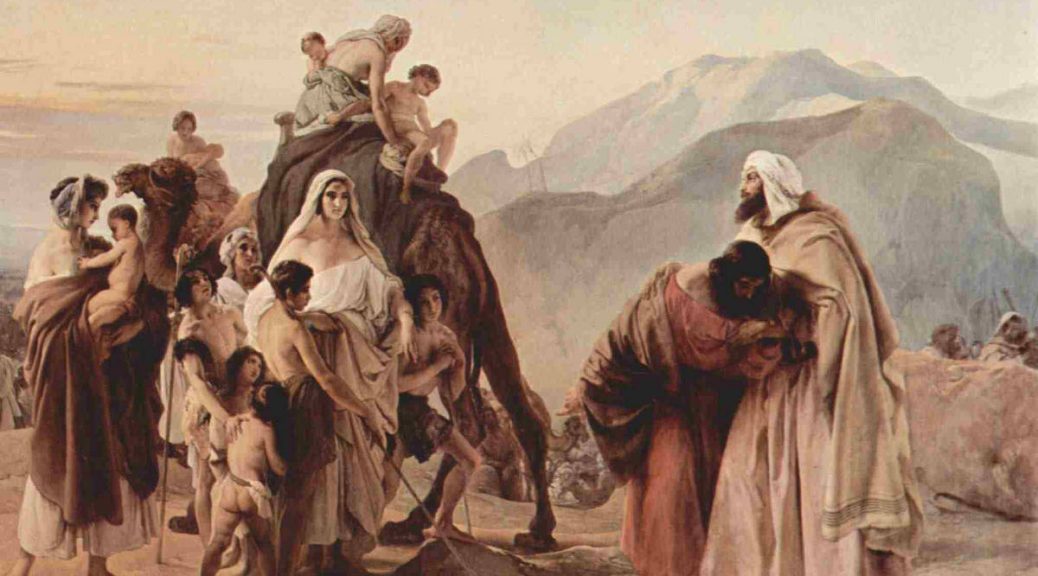 Much like in his actual life, Esau is often overlooked in studies of Genesis. Jacob gets the vast majority of ink for that generation’s story. Jacob, the father of Israel, is the focus even though his methods are often less than ethical. Esau is reduced to a slightly dense, impulsive whiner with a temper bad enough to scare his brother right out of the country. But I don’t believe that is who Esau was, and it certainly isn’t who he eventually became.

I have twin boys myself, and I imagine that Jacob and Esau grew up much like my sons. Constant wrestling, playing, fighting, and loving. My sons will bicker with a passion that only comes from the certainty that the other will not abandon them, but they hold the exclusive right to harassment. “No one gets to insult my brother but me!” Their love for each other has been most apparent in the times that they have been apart since birth. The first time that one of my twins had to travel away for a few days to see a medical specialist, both boys sobbed as the car pulled away and were adorably ecstatic when they were reunited a few days later. I guess that’s what happens when you’ve been with someone since the moment of your conception. I suspect Esau and Jacob were similar, and that is probably exactly why Jacob’s betrayal was so painful for Esau.

After the well-known story of Jacob deceitfully swiping Esau’s firstborn blessing from their blind, aging father, Esau begs his father for some sort of leftover blessing. Isaac has already dispensed with his best blessings, and there is no going back. He had already claimed over Jacob, “May God give you heaven’s dew and earth’s richness” as well as the promise that his brother would serve him (Gen 27:28-29).

Isaac repeats this to Esau, “Your dwelling will be away from the earth’s richness, away from the dew of heaven above [obviously physically away from where Jacob would be]. You will live by the sword and you will serve your brother” (Gen 27:39). But then Isaac added a unique prophecy: “But when you grow restless, you will throw his [Jacob’s] yoke from off your neck.” (Gen 27:40). I believe THIS was the heart of the blessing from father to devastated son. It was a prophecy that bitterness would be replaced by forgiveness, rage by grace. But only when Esau was ready, only when he grew restless of his grudge against Jacob. The CEV translation says, “But when you decide to be free, you will break loose.” The Amplified Bible Translation adds the details, “However it shall come to pass when you break loose [from your anger and hatred], That you will tear his yoke off your neck [and you will be free of him].” It’s the fulfillment of this blessing that paints a vivid picture of forgiveness and whispers of the grace that is coming in the person of Jesus.

What I missed in many readings of the story of Esau’s rage was that his plan to murder Jacob was incredibly calculated. He explicitly stated that he planned to wait until Isaac died and the appropriate period of mourning was over before he killed his twin (Gen 27:41). Jacob did not run off overnight in fear of his brother. His exit to his uncle Laban’s house involved preparations and an excuse authored by Rebekah and executed by Isaac to get Jacob away before Isaac’s death (Gen 27:41 – 28:5). In fact, the text says that it was Isaac who “sent Jacob away” (Gen 28:5).

Jewish tradition paints Esau as an evil man who was thwarted by a very wise Rebekah who saw the truth of her sons’ characters when their father was both figuratively and literally blind to it.[1] I am skeptical that the story has enough information to make that kind of a claim about either man, but what I do see is an incredible difference between our last glimpse of a livid, murderous Esau in Genesis 27 and the one who ran out to greet his long lost twin brother in Genesis 30.

When Jacob finally decided to return to the land of his birth twenty years after fleeing, he was terrified of meeting his twin again. Before the inevitable reunion, he divided his property and family into groups, thinking that if Esau attacked them perhaps some would survive (Gen 32:7). He also sent an absurd amount of gifts ahead of him hoping that they would soften Esau’s heart toward him (Genesis 32: 13-16). Clearly, Jacob was expecting the same rage that he had left behind twenty years earlier, but that is not the character of man who met him.

In what is one of the most unexpected, tender moments in Scripture and one that is oddly similar to the story of the Prodigal Son in Luke 15, we read that “Esau ran to meet Jacob and embraced him; he threw his arms around his neck and kissed him. And they wept.” This must have been the last thing that Jacob expected from the twin whom he had betrayed, the twin that had once wished him dead.

Yet Jacob was still not convinced that he was out of danger. Esau offered to accompany Jacob on the rest of his journey, but Jacob replied that he must to go very slowly for the sake of all his young children and animals and did not want to inconvenience Esau’s party. Then Esau offered the protection of some of his men, but Jacob ducks out of that as well. Esau’s party headed southeast to Seir (Edom) where Jacob promised he would meet him soon (Gen 33:14). However, Jacob went in the opposite direction, northwest to Sukkoth and eventually Shechem and settled there (Gen 33:17). It was another betrayal by Jacob, and it was years before Jacob finally turned around and headed back toward home. (Interestingly, there is no record of God speaking to him from the night before he met Esau in Genesis 32 until he finally left Shechem to return home.)

The heart of this story is very easy to miss in all of the details of locations and people and subplots woven in the text. Twenty years passed since the time that Jacob fled due to Esau’s vow to murder him upon their father’s death. But twenty years had changed Esau. Changed him enough that Jacob returned home while their father was still living. And when Isaac finally died? “… his sons Esau and Jacob buried him” (Genesis 35:29). Together and in peace and forgiveness of past wrongs, these brothers mourned their father’s passing. Esau’s legacy is not jealously and bitterness. His legacy is extending grace and forgiveness and learning contentment in life’s unfair and unexpected turns. His legacy is embracing with joyful tears the ones who have betrayed us most deeply and repeatedly and setting aside wrath that would destroy for mercy’s sake. Esau’s legacy oozes the fragrance of a Savior who does the same.

2 thoughts on “Esau: A Portrait of Grace”